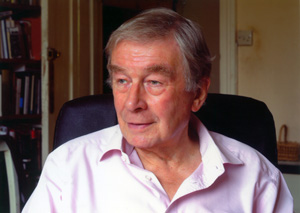 Born in 1931, Alan Brownjohn’s career has included teaching, lecturing, and poetry criticism, but he is best known as a poet. One of his most popular poems, well-known to generations of schoolchildren, is “To see the rabbit” – about the sad “last rabbit in England”.

In his reply to the invitation to become a Patron, he claimed to be unused to “thinking positively in humanist ways: I’ve tended (more and more as I get older) to be a rather negative anti-religionist…” But in fact he has proved to be a most positive and supportive humanist. He chaired a session of the first Humanist Philosophers’ conference, ”Is Nothing Sacred?” and joined in a final panel discussion on The Idea of the Sacred. In July 2001 he was one of the signatories to a letter published in The Independent which urged the Government to reconsider its support for the expansion of maintained religious schools. He was one of the signatories to a letter supporting a holiday on Charles’ Darwin’s birthday, published inThe Times on February 12, 2003, and also sent to the Prime Minister and the Home Secretary (though he had some reservations about the disruptions caused by public holidays). And he has supported the Free Speech Movement and Humanists UK in its campaigns against the blasphemy law: he was one of the 111 names behind the “republishing” in 1978 of James Kirkup’s poem “The love that dares to speak its name”, in defiance of the private prosecution brought against it by Mary Whitehouse, and he supported a public reading of the poem in 2002 in an event planned by Humanists UK and other humanist organisations to publicise the continued existence of the blasphemy law. He is also an Honorary Associate of the Rationalist Association.

See also
His many books on Amazon.

You are here: About us > Our people > Patrons > Alan Brownjohn