Back to: Successful campaigns

In January 2009 we launched the ‘Atheist Bus Campaign’. Originally intended for buses in London, an appeal to fund the ads was so popular that the campaign was expanded across the UK and then widely copied by other humanist and atheist organisations around the world.

We were one of the Atheist Bus Campaign partners and the slogan is accompanied by links to humanists.uk, www.richarddawkins.net and http://www.atheistcampaign.org/.

How did the Atheist Bus Campaign start?

The Atheist Bus Campaign began when comedy writer Ariane Sherine wrote a Comment is Free article in June 2008 about Christian adverts running on London buses. These ads featured the URL of a website which said non-Christians would burn in hell for all eternity. Ariane suggested that atheists reading her article could each donate £5 to fund a reassuring counter-advert.

Political blogger Jon Worth read the article and set up a pledgebank page to which 877 people signed up to pledge £5, but unfortunately the total required was not reached. The campaign received a boost when we took it up and our Patron Richard Dawkins generously agreed to match all donations up to a maximum of £5,500. We administered donations via the JustGiving page where members of the public could donate.

The campaign aimed to raise £5,500 but ended up raising over £150,000 – enough to support buses all across the UK, adverts on the London Underground and two animated screens in Oxford Street.

JustGiving commented twice on the speed and volume of donations to the Atheist Bus Campaign, starting their first blog post simply, ‘Wow’. They later tried to explain the success.

There were a huge number of repeat donors and we know that many began to treat the system as a ‘pay as you go message board’, leaving messages of support for each other and expressing exhilaration at the good-natured message being promoted. There was a tremendous community spirit around the campaign and we sincerely thank everyone who took part.

And the wheels on the bus go round and round…

The huge support for the Atheist Bus Campaign showed that non-religious people want their voice to be heard.

The campaign spread across the world, with many national humanist organisations encouraged to adopt versions of the design for themselves, usually translating the slogan and using the same font and style. 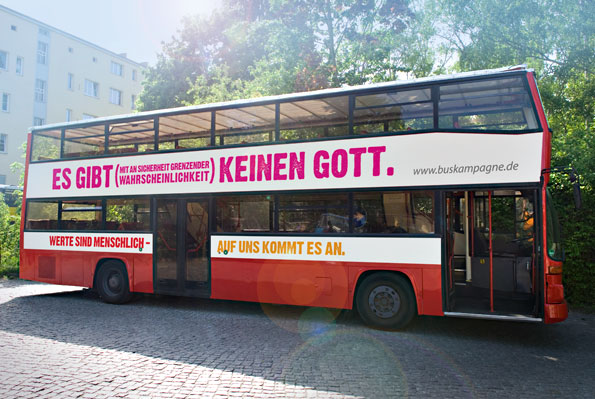 A small portion of funds remaining from the original appeal were used later in 2009 in a new campaign marking Universal Children’s Day and focusing on the rights of children to grow up with a reasonable degree of autonomy.

The ‘Please Don’t Label Me’ billboard campaign also prompted us to ask for donations to fund our work on religion and schools. Once again the response was hugely generous, raising 101% of the funds to support our dedicated faith schools officer for another year.

You can still donate to this work at humanists.uk/donate.

More of your frequently asked questions

Why only ‘probably’ no god?

As with the famous Carlsberg ads (‘probably the best lager in the world’), the word ‘probably’ helps to ensure that our ads will not breach any advertising codes. The Committee of Advertising Practice advised the campaign that ‘the inclusion of the word “probably” makes it less likely to cause offence, and therefore be in breach of the Advertising Code.’

There’s another reason I’m keen on the ‘probably’: it means the slogan is more accurate, as even though there’s no scientific evidence at all for God’s existence, it’s also impossible to prove that God doesn’t exist (or that anything doesn’t). As Richard Dawkins states in The God Delusion, saying ‘there’s no God’ is taking a ‘faith’ position. He writes: ‘Atheists do not have faith; and reason alone could not propel one to total conviction that anything definitely does not exist’. His choice of words in the book is ‘almost certainly’; but while this is closer to what most atheists believe, ‘probably’ is shorter and catchier, which is helpful for advertising. I also think the word is more lighthearted, and somehow makes the message more positive.

The Christian ads to which the Atheist Bus Campaign was a response linked to a website that promised non-Christians an eternity of torment in a lake of fire. Pretty worrying. The Atheist Bus slogan offer a dissenting view from this and are positive messages, urging that we enjoy our lives.

More philosophically, a key humanist response to religious concepts is that they distract from the reality of human affairs. Focusing on human nature and social reality means that humanists need not be worried about notions which actually need have no bearing on our lives. For example, fretting about the ‘afterlife’ is a distraction from the one life we know for sure we do have; muddling over the theology of ‘Natural Law’ makes some religious believers think that gay people are immoral based on an intrinsic characteristic!; worrying about what God said in this or that religious text is a distraction from thinking about what we can say ourselves about values, happiness and society.

Why say ‘enjoy your life’?

People who do not believe in gods or other supernatural things, do not usually believe in life after death. Humanists believe that death is the end of our personal existence, that we have only one life and must make the most of it – as Robert Ingersoll, a nineteenth century American humanist said, ‘The time to be happy is now!’

Was this really a good use of Humanists UK’s money?

All the money used to pay for the ads came from the thousands of individual donors who supported the campaign. One of the great things about the campaign is that the support came from the grassroots, demonstrated by these thousands of small donations from members for the public, and its origins with Ariane and Jon. No money was diverted from other projects; indeed the heightened attention to humanism and atheism even helps further our other campaigns. As mentioned above, we were able to raise further funds to support our work and many new members found us for the first time.

This has been an overwhelmingly positive campaign, as evidenced by thousands of warm, good-natured comments at justgiving.com/atheistbus. It isn’t, and was never intended to be an attack on religion or an attempt at ‘proselytising’ for atheism. After all, an advert on a bus isn’t going to convert anyone, and whilst a few – but very few – commentators have seen it as ‘anti-religious’, most have recognised it as a simple statement of non-religious beliefs.

Our slogan is an affirmation for people that it’s OK not to be religious; that if you are not religious, there is absolutely no reason to worry about that.

The advertisements were designed as a response to particular hellfire-and-brimstone adverts; our slogan is an affirmation for people that it’s OK not to be religious; that if you are not religious, there is absolutely no reason to worry about that, and that one can lead a happy, enjoyable and rewarding life without religion. Of course most non-religious people recognise that the best way of leading a happy, enjoyable, positive and rewarding life is by working with, cooperating with, and supporting other people to do the same.

Where did the buses go?

See our Google map of where the buses went. The idea of the bus ads running in London sparked imaginations up and down the country, prompting calls to take the buses ‘on tour’. Most importantly, like-minded people across the UK offered not just their financial support but their considered, good-natured, humanistic endorsement.

What do you think about the response from religious groups?

By and large the Atheist Bus Campaign was well-received and many religious people commented positively that the buses opened debate, rather than trying to shut debate down.

One attempt to silence the adverts by Christian Voice was rejected by the Advertising Standards Authority who said that while they could not rule on the ‘substantiation’ of the claims, they did conclude that the adverts were ‘unlikely to mislead or to cause serious or widespread offence.’

The adverts have also prompted further campaigns from three Christian organisations. Our then-Chief Executive, Hanne Stinson, said ‘We entirely support free expression and freedom of belief, and so fully support the right of these Christian groups to place their ads on buses… Our ads were positive and peaceful. They didn’t say, for example, that religious people were “fools”, unlike one of the response ads being run, which says that “The fool hath said in his heart, there is no God.”’

How else can I support humanism?

The huge support for the Atheist Bus Campaign showed how many non-religious people there are who want their voice to be heard. We need your help to make that happen.

We are the national charity supporting and representing people who seek to live good lives without religious or superstitious beliefs. We promote humanism, run numerous campaigns for an open society, a secular state and a rational humanist approach to public ethical issues and work in education in both schools and to the public at large.

You can donate to our work, promoting humanism, campaigning on ethical and policy issues, on education and faith schools, and supporting the Humanist Ceremonies network across the UK.

You can help by becoming a member or you can simply register to receive our e-bulletin and stay in touch with our campaigns actions.