Writer and patron of Humanists UK 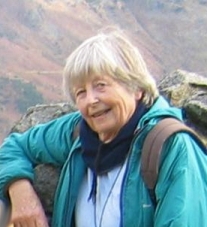 Jane Wynne Willson is best known within the humanist movement for her ever-popular books on non-religious ceremonies. Funerals Without God was first published in1989 and is now in its sixth edition, as is Sharing the Future (on weddings and civil partnerships) which was first published in 1988. New Arrivals (on baby namings) was written in 1991 and a revised edition, written jointly with then Executive Director Robert Ashby, came out in 1999. All are published by Humanists UK . They remain indispensable practical guides to non-religious and humanist ceremonies, full of relevant readings, music and excellent advice for people at key moments in their lives, and can be bought here.

Jane Wynne Willson has been involved in the humanist movement locally, nationally and internationally since the 1960s. A third generation agnostic, she first became aware of organised Humanism when her oldest child met religion head-on at primary school. She then became actively involved in local Humanism, starting groups first in Bristol and subsequently in Cheltenham. She is currently on the committee of Birmingham Humanists. She was on Humanists UK Executive Committee from 1966 to 1972, until full-time teaching made this impossible and she confined her activities to serving on several of Humanists UK’s sub-committees. After taking early retirement, she was re-elected to the EC in 1988 and remained on it for a further 6 years, being Chair of Humanists UK from 1989 to 1992. She has been a Director of the Rationalist Press Association for some years.

Internationally, Jane Wynne Willson was one of the three Co-Chairs of IHEU from 1993 to 1996, and then was a Vice-President until 2002. She was on the Board of EHP (European Humanist Professionals) during the 1990s and, in 1997, was presented with the professional humanist award in recognition of her work for Humanism.

She has, with her husband of 51 years, brought up 2 daughters and 2 sons. Their family has now grown with the addition of 10 grandchildren and, a few years ago, Jane felt qualified to write some thoughts on this in Parenting Without God – experiences of a humanist mother, having been encouraged to do so by the then Humanists UK President, the late Sir Hermann Bondi. In time out from the family and Humanism she worked for 18 years as a Special Needs teacher in comprehensive schools in the Midlands , for seven of those years as a Head of Department.

You are here: About us > Our people > Patrons > Jane Wynne Willson