Although I have held a belief in atheism for many years, only fairly recently have I become more convinced that religious belief, based in ignorance and mythology, is one of the major threats to peace and our survival on this planet. Our only hope for the future is to base our actions on rational thought and analysis – with an understanding of the strengths and weaknesses of human behavioural tendencies and the science of life on Earth. I very much support the work of Humanists UK as an organisation that is dedicated to enlighten our fellow human beings to this need. 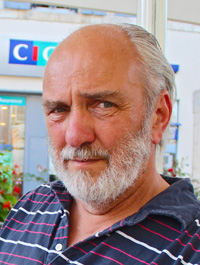 Dr Iolo ap Gwynn was born in London on 18th March 1944 to Welsh-speaking parents. His father Harri Gwynn was then a civil servant, with an MA in history, and his mother Eirwen Gwynn was the first woman to gain a PhD in Physics in the University of Wales. In 1950 they bought a farm in North Wales, supplementing their income by writing, lecturing and broadcasting, initially on radio and later on TV.

Being brought up so close to nature gave him an early interest in the natural world, which eventually resulted in a University of Wales BSc and PhD degrees in zoology at Aberystwyth, after attending school at Ysgol Eifionydd, Porthmadog. Living close to the mountains of Eryri (Snowdonia) also provided the opportunity to explore the mountains and develop a love of mountains and lifelong skills in mountaineering. He was a founder member and first chair of Clwb Mynydda Cymru (The Welsh Mountaineering Club). He is currently Vice-chair of the Snowdonia National Park Authority and a member of Amgueddfa Cymru – National Museum Wales Board of Trustees. He is also currently Chair of the Board of Trustees at the Centre for Alternative Technology.

At retirement he was a Senior Lecturer in Zoology at the Institute of Biological, Environmental and Rural Sciences, The University of Aberystwyth having spent a study leave period as Visiting Professor at the AO Research Institute, Davos, Switzerland. With research interests in cell biology and electron microscopy he is a Fellow of the Royal Microscopical Society, and was Chair of the UK Cryo-Microscopy Group as well as a founder member and first Chair of Y Gymdeithas Wyddonol Genedlaethol  (The Welsh Scientific Society). He was an invited lecturer at many international conferences and organised several. A special tribute was paid to him and his scientific work at the 2008 ECM Conference in Davos, Switzerland. He is currently Chair of Canolfan Edward Llwyd (Edward Llwyd Centre) whose role it is to support and develop the study of the sciences through the medium of Welsh at the Welsh universities. He has also been involved with the production of many radio and TV programmes about science and mountaineering, as well as lecturing at evening classes on environmental and biodiversity matters. He was also editor of the University of Wales science journals Y Gwyddonydd and Delta and is currently Production Editor of the European Cells and Materials journal. He has published over 150 scientific papers and articles. In 2008, he was awarded the Science Medal of the National Eisteddfod of Wales for his contribution to science in Wales and in the following year was invited to present the National Eisteddfod annual lecture on “What Darwin and Wallace did not know”.

You are here: About us > Our people > Patrons > Dr Iolo ap Gwynn FRMS