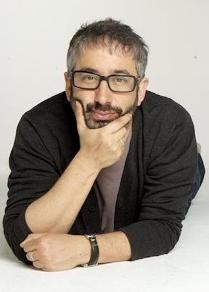 Born in May 1964, David Baddiel grew up in North London. His mother was a Jewish refugee from Nazi Germany, but Baddiel has said that going to an orthodox Jewish school as a child put him off religion. After studying at Haberdashers’ Aske’s Boys’ School, he read English at King’s College, Cambridge, where he was a member of the Cambridge Footlights. He graduated with a double first and began a doctorate at UCL, and though early success as a stand-up comedian put an end to his academic career, he remains interested in literature: he writes a regular books column for The Times and in 2007 he hosted BBC4’s “The Book Quiz”. He has also written three novels: Time For Bed, Whatever Love Means and The Secret Purposes. (If you buy his books at Amazon.co.uk through this link a small commission will go to Humanists UK.)

Baddiel’s broadcasting career took off after he formed a writing and performing partnership with fellow-comedian Rob Newman in 1988, and he first became famous in “The Mary Whitehouse Experience”, a radio series which moved to television. Since then, he has appeared in many comedy shows on radio and television, including the 2004 – 2007 Radio 4 show “Heresy”, which challenged received opinions. In 2007 he made a documentary for BBC1 on the subject of the history of restitution for holocaust victims and their descendants, “Baddiel and the Missing Nazi Billions”.

In January 2010 he “courted controversy with film about ‘Muslim Jew'”, The Infidel (The Independent, 18/01/10). The film is a comedy about a British Muslim who discovers that he was born Jewish. The Independent reported:

David Baddiel…has written the script, which is littered with jokes deliberately poking fun at both the Islamic and Jewish faiths. As someone with Jewish roots, Baddiel, 45, says he was compelled to tackle the potentially thorny area in his first feature-length film because he wanted to provide an antidote to today’s hypersensitive society. He says he has taken a “gloves-off” approach to the subject matter, and is hoping that his audiences will “get the joke”.

“I wasn’t interested in writing about Muslims and Jews per se, but I am always interested in tackling subjects that aren’t being tackled, just for the sake of newness,” he told The Independent. “Because people have become terrified of giving offence, religion and race are now rather left out of comedy.

“For me, it becomes fertile ground. It’s very much about race and culture and ethnicity, in a very gloves-off way. But it’s not trying to cause offence: I’m very uninterested in that as a writer.”

He is a patron for the Campaign Against Living Miserably (CALM), acted as compere for the “Stand-Up to Stop Suicide” event and has appeared on radio ads to publicise the problem of young male suicides. In February 2009 he joined several other entertainers signing an open letter printed in the The Timessupporting Bahá’í leaders then on trial in Iran. He describes himself as a “10/10 atheist” (compared to Richard Dawkins who has described himself as a 9/10 atheist).

See also
His wikipedia biography
A five-minute interview with Baddiel on football, religion and cooking at
http://news.bbc.co.uk/1/hi/entertainment/8016266.stm

You are here: About us > Our people > Patrons > David Baddiel