Labour peer, Chair of the All Party Parliamentary Humanist Group, and Patron of Humanists UK 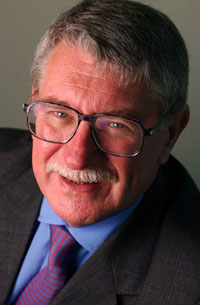 Born in 1940 in Larkhall, Scotland, Lord Macdonald was educated at Allan Glen’s School, Glasgow, and he has worked as an engineer in the shipbuilding industry, as a journalist on The Scotsman, and as producer/presenter on ITV and Channel 4. He returned to Scotland in 1986 as Director of Programmes for Scottish Television, becoming Managing Director in 1990 and Chair of Scottish Media Group plc at the end of 1997, and of Taylor and Francis plc.

In 1998 he was elevated to the House of Lords, where he takes the Labour Party Whip, as Baron Macdonald of Tradeston in the City of Glasgow. He served in the UK Government as Minister for Business and Industry in the Scottish Office (1998–99), Minister for Transport (1999–2001), and Minister for the Cabinet Office and Chancellor of the Duchy of Lancaster (2001–03). He was also a member of the  Cabinet Office Advisory Committee on Business Appointments and of the House of Lords’ Select Committees on Economic Affairs (2004-2008), and Communications (2009-). He chaired the All Party Parliamentary Humanist Group from 2005-2010.

He has spoken in the Lords on the need for the BBC to broaden its religious output:

…during 30 years working in television I was responsible for the production of religious programmes during periods at Granada and Scottish Television. As a non-believer I worked amicably with the religious advisers and produced a pretty wide range of programmes that were usually well received by viewers of all faiths and none. I hope to build on that experience of constructive collaboration and perhaps persuade colleagues who are religious to support my appeal today for television scheduling that is broadened to encompass ethical and philosophical as well as religious matters; scheduling that allows time for the systematic exploration of other belief systems such as humanism…
Hansard

He is also Chancellor of Glasgow Caledonian University, Member of the of Court at the University of Sussex, and Patron of the Dystonia Society.

You are here: About us > Our people > Patrons > Angus John “Gus” Macdonald, Baron Macdonald of Tradeston, CBE, PC