Back to: Humanists Doing

Humanists UK is sometimes asked to recommend secular charities, and occasionally we are asked why there are no specifically humanist ones.  Our answer to the second request is contained in our answer to the first one – when there are so many excellent, non-religious, inclusive charities (see “Secular Charities” below for a small selection) we generally see no need to set up our own. Most humanists prefer to work for good causes with others (of all faiths and none) and to donate time or money to charities that do not discriminate on grounds of religion (or non-religion) or promote one particular worldview.  (Indeed, a more pertinent question might be why some religious people feel the need to work through religious charities rather than mainstream ones.) 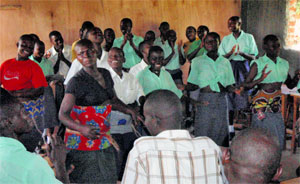 A current example of specifically humanist charitable work is the humanist schools project in Uganda, including the Uganda Humanist Schools Trust.  (The image left is of students performing at the Mustard Seed school.) In this special circumstance the advantage of providing an overtly secular alternative to the often heavily missionary Christian schools is deemed to outweigh the disadvantage of associating humanitarian projects with a particular worldview.

Humanists can also donate to some other good causes and appeals in ways that draw attention to their non-religious ethical motives for doing so. Many humanists support the Humanist Team on Kiva, which offers “micro-finance” loans to entrepreneurs, empowering them to lift themselves out of poverty.

Humanists UK members give money and/or time generously and regularly to an average of 6 charities each.  Humanists tend to plan their giving rationally and selectively, but most also respond generously to emergency appeals and street collections. The most popular causes were those connected with social welfare (27%) and international development/aid (21%).  Only 2 out of 676 respondents did not support charitable giving.  (Humanists UK survey in Humanity, 2000).  For comparison: according to a Mori survey for Nestlé Family Monitor in 2000, just under half the British public undertook voluntary work that year, and 92% had given money to at least one charity. 1 in 5 gave regularly, and 1 in 5 was a member of a charity, though the most popular forms of giving were to street collections (55%) and to door-to-door collections (50%). Only 36% of the general public contributed to 5 or more charities. Children’s charities and medical research charities were the most popular.

Given that so many humanists tend to consider their charitable donations carefully and thoughtfully, here are some links to other resources which enable you to search and assess the performance of different organisations.

(It should be noted that even these resources are not uniformly welcomed.  As with all comparative assessment of this kind there is scope for disagreement and interpretation.  Many charities undertake complex work which is difficult to quantify.)

We also list a few specific organisations for which there seems to be particular support amongst Humanists UK membership.

Here are some organisations with their own particular messages.  Not all humanists will uniformly agree with the specific agendas of such organisations. We list here a few organisations over which there seems to be a significant correlation of support amongst humanists.

Humanists UK  is itself a charity with an educational mission, campaigning on ethical, rights and equalities issues and representing humanists and other ethical non-religious people in the public sphere.  You can join or donate on this website.

We are also a founding member of the Accord Coalition which – alongside religious and other rights and campaigning organisations – demands a fair and balanced curriculum on religious education and an end to discrimination in employment and admission in state-funded religious schools.