At a time when the achievements of the enlightenment are questioned, ridiculed, misunderstood and traduced by those who would reverse the progress of mankind, it is essential to nail one’s colours to the mast as a humanist.

For me, that is not a turning away from mystery or a cold rational dispute with the numinous and spiritual in life, it is an acceptance of the awesome and splendid responsibility we each have for our own destinies, ethics and morals. I repudiate the authority of churches, revealed texts and vain unsubstantiated assertions and embrace the shared glories of humanity’s intellectual and spiritual struggle to understand the universe into which we are born with honesty, openness and faith in our own natures. 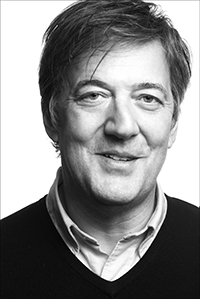 Born in August 1957, Stephen Fry had a somewhat chequered education and youth, being expelled from two schools and spending three months in prison for credit card fraud at the age of 17. But on his release he went back to education and did well enough to gain a scholarship to Queens’ College, Cambridge, where he joined the Cambridge Footlights, appeared on “University Challenge”, and gained a degree in English Literature. In 2009 Gay Times and The Guardian published a letter from Fry to his younger self explaining how his future will unfold and reflecting on the positive progression towards gay acceptance and openness around him, while warning that “the cruel, hypocritical and loveless hand of religion and absolutism has fallen on the world once more”.

Fry met his future comedy collaborator Hugh Laurie at Cambridge, and his television career began soon afterwards with the broadcast of the 1981 Cambridge Footlights Revue which he had co-written with Hugh Laurie, Emma Thompson and Tony Slattery. Probably his best-known television appearances since then have been in “A Bit of Fry and Laurie” and “Blackadder”, as Jeeves in “Jeeves and Wooster”, and more recently as host of the panel game “QI”. He has also made documentaries, including “The Secret Life of the Manic Depressive” and “HIV and Me”, as well as programmes about America and the natural world. He has also acted in several films, directed the film “Bright Young Things”, and can be heard regularly narrating, acting, presenting or interviewing on radio,. His highly successful multi-faceted media career had a set-back in when in 1995 he disappeared after a few days in the West End production of Simon Gray’s play “Cell Mates”, pleading stage fright. One result of this episode was his “coming out” as bipolar.

He has written four best-selling novels, an autobiography, Moab is My Washpot, and a book on poetry form, The Ode Less Travelled, and is well-known among a younger generation as the reader of the audiobook versions of J.K. Rowling’s Harry Potter novels. He has also written for newspapers and is well-known as a blogger and tweeter.

His many achievements have been widely recognised and honoured. In 1995, he was presented with an honorary doctorate from the University of Dundee, and he served two terms from 1992 to 1998 the student-elected Rector of the University of Dundee. He was also awarded an honorary degree from Anglia Ruskin University, is an honorary fellow of Queens’ College, Cambridge, and was made honorary president of the Cambridge University Quiz Society. In December 2006 he was ranked sixth for the BBC’s Top Living Icon Award, and was voted “most intelligent man on television” by readers ofRadio Times. The 2007 Independent on Sunday “Pink List” named Fry the second most influential gay person in Britain. Also in 2007, he was BT Mind Champion of the Year, in recognition of his work on raising awareness of bipolar disorder. He has been described as a polymath, a “national treasure”, and a “Treasure of the British Empire”, and won a lifetime achievement award at the British Comedy Awards in 2007.

He has used his public profile to promote many causes and charities. He has worked for the Prince’s Trust, is a member of the British Jews for Justice for Palestinians, and opposed the Iraq War. His interest in and enthusiasm for wildlife and conservation was very evident in his 2008 television series “Last Chance to See”, and he wrote for the RSPB magazine Nature’s Home in 2015: “When you think about losing what you love because of climate change, it’s a no-brainer to want to see things change for good.” He was one of the signatories to a statement published by Sense About Science on 4 June 2009, condemning the use of British libel laws to “severely curtail the right to free speech on a matter of public interest”, in this case the British Chiropractic Association suing science writer Simon Singh for libel – a cause supported by many humanists and rationalists. In 2009, Fry lent his support to a campaign led by the human rights organisation Reprieve to prevent the execution of Akmal Shaikh, a British national who suffered from biopolar disorder and who was executed in China in December 2009.

His April 2009 “letter to himself” in The Guardian  expresses a certain mature contentment as well as his concern that hard-won freedoms are under threat: “…my message from the future is twofold. Fear not, young Stephen, your life will unfold in richer, more accepted and happier ways than you ever dared hope. But be wary, for the most basic tenets of rationalism, openness and freedom that nourish you now and seem so unassailable are about to be harried and besieged by malevolent, mad and medieval minds.”

He has also been candid about his episodes of mental health problems. In 2009 he was awarded an honorary fellowship of the Royal College of Psychiatrists in recognition of his work in this field.

Stephen Fry’s 1997 autobiography Moab Is My Washpot – buy any of his books at Amazon.co.uk through this link and a small commission will go to Humanists UK.

You are here: About us > Our people > Patrons > Stephen Fry