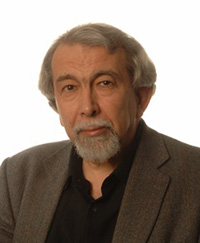 Distinguished scientist and supporter of Humanism

Born in Brighton in 1942, Sir Tom Blundell was educated at Steyning Grammar School. In BBC Radio 4’s “Desert Island Discs” in June 2007, he described how he was attracted to both the arts and the sciences at school, and resented having to choose between them, though eventually he chose the sciences and gained an open scholarship to the University of Oxford. As a student at Oxford in the Sixties, he was drawn to political activism, but again found he had to choose between his main interests. Once again he chose science because, he says, he realised that politics was too difficult.

Sir Tom completed his terms of thirteen years as Sir William Dunn Professor of Biochemistry and Head of Department and six years as Head of the School of Biological Sciences on 30th September 2009. He was appointed Director of Research and Professor Emeritus. He continues to teach and conduct research in structural and computational biology and in drug discovery. In July 2009 he took up the post of Chair of the Biotechnology and Biological Sciences Research Council, a non-executive part-time appointment. He is also President for the Science Council. His specialism is molecular biology and his research on identifying the chemical processes of diseases has led to the development of drugs to treat Aids, cancer, cataracts and diabetes. Molecular biology is a very visual kind of science, and this, he says, is no coincidence – he loves science first and foremost for its beauty, he told Radio 4’s “Desert Island Discs” – where he also discussed his non-religious worldview.

As a distinguished biochemist, since the 1980s he has been able to combine his interests in science and in politics, chairing numerous Government science committees, and making key policy recommendations on issues as diverse as mad cow disease, the environment and climate change. He was chair of the Royal Commission on Environmental Pollution when it produced the influential report Energy, the Changing Climate (2000), and author of RCEP’s 2004 report, Turning The Tide, Addressing The Impact Of Fisheries On The Marine Environment, which warned of a dramatic decline in the state of the British marine environment and called for a smaller fishing fleet and ban on deep-sea trawling. “Our seas are being challenged,” he told BBC News. “Trawling scrapes the bottom; we fish down the fish chain, taking out the large species. We have huge bycatches – 30%, sometimes 50%. This is simply not sustainable.” He has also been on the advisory committee of the Parliamentary Office for Science and Technology, and between 1991 and 1994 was director general of the Agricultural and Food Research Council. From 1994 to 1996 he was chief executive of the Biotechnology and Biological Sciences Research Council.

Among the many honours bestowed upon him are the Alcon Award for Vision Research, the Gold Medal of The Institute of Biotechnology and the European Award for Innovation in Biomedical Sciences. He was knighted in 1997.

He was one of the signatories to a letter supporting a holiday on Charles’ Darwin’s birthday, published in The Times on February 12, 2003, and also sent to the Prime Minister and the Home Secretary. In July 2009 he was one of the eminent scientists and educators calling for vital changes to the proposed science curriculum for primary schools in England in a letter to the Secretary of State for Children, Schools and Families.

See also
His Research Interests and a Cambridge University profile

You are here: About us > Our people > Patrons > Sir Tom Blundell