Christians… say that if you are an atheist you have to be a nihilist and there’s no meaning any more. Well, that’s nonsense… Now that I’m conscious, now that I’m responsible, there is a meaning, and it is to make things better and to work for greater good and greater wisdom. That’s my meaning – and it comes from my understanding of my position. It’s not nihilism at all. It’s very far from it. 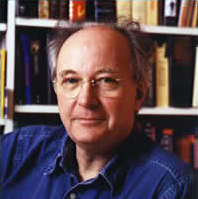 Philip Pullman’s best known work is the trilogy His Dark Materials, beginning with Northern Lights (The Golden Compass in the USA) in 1995, continuing with The Subtle Knife in 1997, and concluding with The Amber Spyglass in 2000. This excellent and absorbing trilogy is an imaginative and humanistic story of growing up, with elements of mythology, fantasy and magic, philosophy and theology, in which organised religion is not treated kindly and God, the elderly and frail tool of the Church, dies.  In an enthusiastic review in New Humanist, Spring 2001, Marilyn Mason, then Education Officer of Humanists UK, described it as: “an absorbing myth that leaves you glad to be human… an epic struggle between good and evil… Good is represented by flawed, sensual, self-conscious humanity and its allies, and Evil is the ancient and unseen Authority, with his angels and agents, which includes a Church which hates and fears and wants to exterminate messy adult passions and consciousness.”

The Catholic Herald, unsurprisingly, described His Dark Materials as “truly the stuff of nightmares… worthy of the bonfire.” Although originally published as children’s books, the trilogy has also proved popular with adults and in 2001 The Amber Spyglass won the Whitbread Book of the Year Award – the first time that this prize had been awarded to a children’s book.  The books have also won the Carnegie Medal and the Guardian Children’s Book Award, and in 2002 Philip Pullman received the Eleanor Farjeon Award for children’s literature. In April 2007 Northern Lights was nominated for the CILIP Carnegie Medal for children’s literature as one of the 10 most important children’s novels of the past 70 years. 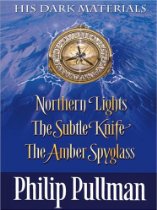 Since the publication of His Dark Materials, Philip Pullman has also become known as a public commentator on religion, and on education and literature. See, for example, The Daily Telegraph record of his March 2004 National Theatre conversation with the Archbishop of Canterbury, Dr Rowan Williams, on the meaning of religion in art and literature, and its enduring relevance to the education of our children. He was chosen byThe Independent for its “Good List 2006” of “50 campaigners, thinkers and givers”; the panel of experts at The Independent cited the worlds this “campaigning atheist” creates “in which children see good as a matter of choices that are within their control. Pullman wants children to realise they are the inheritors of philosophical, artistic and scientific and literary riches”.

In Why Philip Pullman wants to teach children about atheism in The Independent Education supplement, March 2006, he said:

What I fear and deplore in the ‘faith school’ camp is their desire to close argument down and put some things beyond question or debate. It’s vital to get clear in young minds what is a faith position and what is not – so that, for instance, they won’t be taken in by religious people claiming that science is a faith position no different in kind from Christianity. Science is not a matter of faith, and too many people are being allowed to get away with claiming that it is, and that my ‘belief’ in evolution is a thing of the same kind as their ‘belief’ in miracles. What we need in schools, really, is basic philosophy.

In an interesting interview on the Christian website Third Way, he said:

This is the mistake Christians make when they say that if you are an atheist you have to be a nihilist and there’s no meaning any more. Well, that’s nonsense, as Mary Malone discovers. Now that I’m conscious, now that I’m responsible, there is a meaning, and it is to make things better and to work for greater good and greater wisdom. That’s my meaning – and it comes from my understanding of my position. It’s not nihilism at all. It’s very far from it.

In July 2002 he was one of the distinguished humanists who put their names to the publication and distribution of James Kirkup’s poem “The Love That Dares To Speak Its Name” in a public challenge to the blasphemy law in the name of free speech. He was also one of the signatories to a letter supporting a holiday on Charles’ Darwin’s birthday, published in The Times on February 12, 2003, and also sent to the Prime Minister and the Home Secretary. At Humanists UK conference in June 2011, he was given an award for services to Humanism.

He was named a Knight Bachelor in the 2019 New Year’s Honours list.

You are here: About us > Our people > Patrons > Sir Philip Pullman CBE