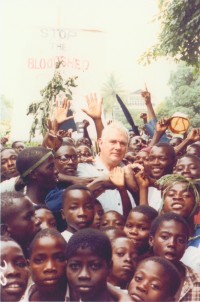 Michael Gore was brought up in a strict Roman Catholic family and attended the Xaverian College in Brighton. There he was threatened with expulsion for promoting Darwinism, having readThe Theory of Evolution during the school holidays. He only avoided being expelled by promising not to speak to any of the boys on the subject again.

He began his working life as a trainee reporter on the Portsmouth Evening News. When he was called up for National Service he was commissioned and posted to Cyprus during the EOKA emergency, where he was Staff Captain in the office of the Chief of Staff to the Governor of Cyprus from 1957-59.

He subsequently joined HM Diplomatic Service and served in Malaysia, Korea, Uruguay (during the Tupamaro uprising) and in four countries in Africa. As Ambassador he experienced the horrific civil war in Liberia and then moved to the Caribbean, first as High Commissioner to the Bahamas and finally as Governor of the Cayman Islands.

In all his postings he encountered religious bigotry and ignorance – one of his staff, a Protestant from Northern Ireland, believing him to be a Catholic, told him that he was the first Catholic he had ever spoken to (!) – and when he retired he decided to make it quite clear that he was an atheist. This he has done.

An amateur naturalist from schooldays, he is the author or co-author of the definitive books on the birds of Korea, Uruguay and The Gambia and has written numerous articles on conservation, illustrated with his own photographs of wildlife.

On Humanism, he says:

Humanism lifts us out of the confines of religious bigotry to which so many of us were brought up, and allows us to explore a world which is free from the narrow dogma of belief in the almighty in whatever form he takes. I was not born a Catholic, nor my friends Jews, Anglicans or Muslims. We were all born human beings and indoctrinated into the religion of our parents. The evil which has resulted from this indoctrination is what we witness today in the form of religious extremism.

You are here: About us > Our people > Patrons > Michael Gore CVO, CBE