..in the absence of any higher authorities, it behoves us to celebrate and protect all we’ve got left, which is ourselves as human. 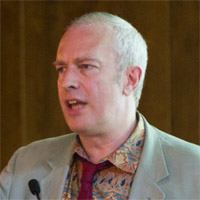 Martin Rowson is a multi-award winning cartoonist and writer whose work has appeared regularly in The Guardian, The Times, The Independent on Sunday, The Daily Mirror, The Spectator, The Morning Star and many other publications. He won the Cartoon Art Trust’s Political Cartoonist of the Year Award in 2000 and 2004 and Caricaturist Award in 2011, and the Political Cartoon Society’s Cartoon of the Year in 2003 and 2007 and was their Cartoonist of Year in 2010. He’s also won the prestigious Premio Satiri de Forte di Marmi International Satire Award in 2006.

His books include comic book versions of TS Eliot’s The Waste Land and Laurence Sterne’s Tristram Shandy, as well asSnatches, a novel, and Stuff, a memoir about his late parents. His latest books are The Dog Allusion: Gods, Pets and How to be Human and Fuck: The Human Odyssey. His updated comic book adaptation of Gulliver’s Travels is  published in March 2012.

In addition to being a Humanists UK Trustee, he is chairman of the British Cartoonists’ Association, and also a trustee of the Cartoon Museum and the Powell-Cotton Museum of Natural History, an honorary associate of the National Secular Society and a former Vice-President of the Zoological Society of London.

He lives in South-East London with his wife and, occasionally, their two children, both now in their twenties.

“I don’t believe in God not because I can’t, or because of the overwhelming scientific evidence (although that obviously helps) but because I don’t want to. Religion is, in my mind, essentially politics with an added dimension latched on by its adherents, and therefore no more or less “true” than any other opinion. It should, in consequence, be treated in the same way as, say, the dicta of the Liberal Democrats. In practice, this boils down to my belief that anyone can believe whatever rubbish they want to, so long as, by and large, they leave me alone. And in the absence of any higher authorities, it behoves us to celebrate and protect all we’ve got left, which is ourselves as human.”

You are here: About us > Our people > Patrons > Martin Rowson