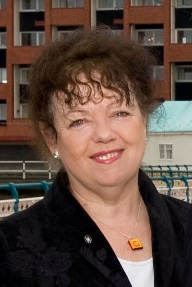 Humanist celebrant, former Member of the Welsh Assembly, and Patron of Humanists UK

Having been an atheist since my teens, I discovered Humanists UK in later life and realised that I was really a humanist.

Born in 1950, Lorraine Barrett started her working life as a nurse, became a Councillor in the Vale of Glamorgan and Penarth, and then in 1999 a Welsh Labour & Co-operative Member of the National Assembly for Wales. In 2011 she chose to retire from the Welsh Assembly in order to concentrate on developing her work as a humanist celebrant. She lives in Penarth and works mainly in the Cardiff and Vale of Glamorgan areas, as well as Bridgend and the Valleys, where she conducts humanist, or non-religious, funeral and baby-naming ceremonies. She says of her work:

I trained as a celebrant with Humanists UK in 2008 and after conducting my first funeral, I knew I was doing something very special. I have met so many lovely families and it is a privilege to help and support them at such a sad time in their lives…

Lorraine Barrett is also Patron of the Marie Curie Hospice in Penarth.

See also her profile at http://humanist.org.uk/lorrainebarrett/

You are here: About us > Our people > Patrons > Lorraine Barrett