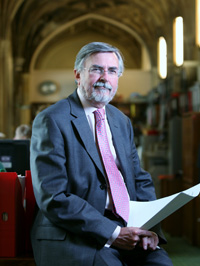 He had been actively engaged in politics from an early age, attributing his interest to his parents’ values and two key events – the UK’s illegal invasion of and war against Egypt and the Russian invasion of Hungary, both in 1957.  He was an active member of the Campaign for Nuclear Disarmament (CND) and Anti-Apartheid (initially, the Boycott Movement).  Actively involved in Labour politics, he had served on the National Committee of Young Socialists and in 1964 became Labour’s youngest full-time Election Agent, firstly for Francis Noel-Baker (Swindon) and then Richard Marsh (Greenwich).  In 1970 he left employment to study Youth & Community Work at Goldsmith’s College, London.  On leaving Goldsmith’s he took up a post as Community Social Worker with the London Borough of Bexley Social Services Department.  In 1974 he was appointed as Community Relations Officer with Bexley Community Relations Council (subsequently Director of Bexley Council for Racial Equality), a post he held until 1992.

He was a founder Member and former Vice-Chair of the Association of London Authorities (1983-87).  Following abolition of the GLC, he served as Chair of the London Ecology Committee and vice-chair of the London Strategic Policy Unit and the London Emergency Planning Information Committee (1985-87).  He was also Environment spokesperson for the ALA.

He studied part-time at the School for Advanced Urban Studies, University of Bristol (1988-1989) and gained an MSc in Policy Studies.

He was elected as Member of Parliament for Woolwich in 1992 and following boundary changes, for Erith&Thamesmead in 1997. He served continuously as MP until his retirement in2010. In Parliament he served as Vice-chair London Group of Labour MPs; Member of Health Select Committee 1994-2005http://www.parliament.uk/business/committees/committees-a-z/commons-select/health-committee/; Joint Committee on Human Rights 2007-2009http://www.parliament.uk/business/committees/committees-a-z/joint-select/human-rights-committee/; Member of UK delegation to Parliamentary Assembly Council of Europe 2005-2010http://assembly.coe.int/, (member of Political Committee and Equal Opportunities Committee; vice-chair of sub-committee on trafficking in human beings and rapporteur on honour based violence)http://assembly.coe.int/Main.asp?link=/Documents/WorkingDocs/Doc09/EDOC11943.htm   Chair British Group Inter-Parliamentary Union 2001-2004 http://www.bgipu.org/; Member of international Executive of Inter-Parliamentary Union http://www.ipu.org/; Chair Commonwealth Parliamentary Association UK 2008-2010 http://www.cpaukbranch.org/; Chair MSF Parliamentary Group 1998-2000.

Outside of Parliament and local government, he has been active in a number of organisations.  He was Chair of the British Youth Council (1967-1969) and actively involved in the campaign to reduce the voting age to 18. He currently supports the BYC campaign to reduce the voting age to 16 http://www.byc.org.uk/ ; He was Hon Chair British Caribbean Association (1999-2009); Co-Chair Council for Arab British Understanding  (1998-2011) he remains a CAABU Board Member http://www.caabu.org/ ; Chair Greenwich Mind (1978-1992); Chair Greenwich Community Health Council (1976-1980) national Chair Association of Community Health Councils for England & Wales  (1980-82); Member of the Political Committee CWS SE Retail (1987-1993).

His hobbies are gardening and cooking.  He has run several Marathons in aid of various charities, including marathons in London, Budapest, Berlin and Siberia.

You are here: About us > Our people > Patrons > John Austin