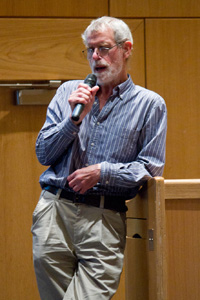 Emeritus Professor of Moral Philosophy, founder-member of the Humanist Philosophers’ Group, and patron of Humanists UK

Richard Norman taught philosophy at the University of Kent for many years, working mainly in the areas of moral and political philosophy, including both theoretical and practical ethics, and is now Emeritus Professor of Moral Philosophy. His books includeThe Moral Philosophers (a critical introduction to philosophical ethics from Plato to the present, buy it here ), Free and Equal (a defence of an egalitarian conception of social justice),  Ethics, Killing and War (which explores the difficulty of justifying participation in war but stops short of an absolute pacifist position –buy it here), and On Humanism (Routledge, 2004 – buy it here).

He is an active member of Kent Humanists and was a founder-member of the Humanist Philosophers’ Group in 1999, as well as of the Humanist Peace Forum, Humanists for a Better World, and Humanist Climate Action. He participated in many HPG conferences including the 2001 conference “Is Nothing Sacred” (buy the book here), the 2002 conference “Death, a Live Issue” (buy Thinking About Death, the book based on the conference, here), the 2003 conference “Faith, Community and the Common Good”, in the May 2006 celebration of the 200th anniversary of the birth of John Stuart Mill, hosted by the Parliamentary Humanist Group in the House of Lords, and in 2009 “Evolutionary Psychology – Is That All There Is?”. He gave a keynote address on ‘Killing the Innocent: Humanism and the Just War tradition’ to the World Humanist Congress in Oslo in 2011.

He has contributed to BHA’s philosophical web resources “Countering Creationism” and ”So you think you can live without God?” and to HPG publications including:
Free Speech and Incitement to Religious Hatred (which he edited)
For your own good? – paternalism re-examined
Religious Schools: the case against (editor)
What is Humanism? (editor)
The Case for Secularism (editor)

He is an active member of the Humanist Dialogue Network and is involved in initiatives to promote constructive dialogue between religious and non-religious people. He co-edited, with Anthony Carroll, and contributed to Religion and Atheism: Beyond the Divide (Routledge, 2016).

Read an interview in which he discusses Humanism with another member of the HPG, Nigel Warburton, here.

You are here: About us > Our people > Patrons > Professor Richard Norman