I never really thought about it till last year when Humanists UK invited me to give a Darwin Day Lecture in London, which I did. After that they asked me to become a distinguished member of Humanists UK . At that point, I looked into their philosophy and moral agenda, asking myself if: ‘Am I prepared to sign up to this?’ I decided that I was, and said: ‘Yes, I would be one’. So, now I often get calls to do radio and TV shows as a humanist.
Susan Blackmore in “The Open Society” (vol 40, Summer 2007) 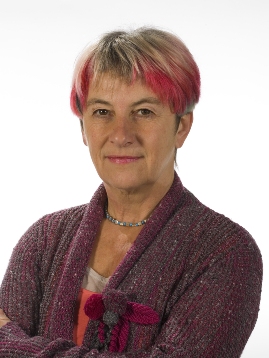 Dr Sue Blackmore is a freelance writer, lecturer and broadcaster, and a Visiting Professor at the University of Plymouth, Bristol. She has a degree in psychology and physiology from Oxford University (1973) and a PhD in parapsychology from the University of Surrey (1980). Her research interests include memes, evolutionary theory, consciousness, and meditation. She no longer works on the paranormal.  She practises Zen and campaigns for drug legalization.

She writes for several magazines and newspapers, and is a frequent contributor and presenter on radio and television. She is author of over sixty academic articles, about forty book contributions, and many book reviews. Her books include Beyond the Body(1982), Dying to Live (on near-death experiences, 1993), In Search of the Light (autobiography, 1996), and Test Your Psychic Powers (with Adam Hart-Davis, 1997). The Meme Machine (1999) has been translated into 13 other languages. Her textbookConsciousness: An Introduction (2nd Edition) was published in June 2010 (Hodder UK, OUP New York), A Very Short Introduction to Consciousness in 2005 (OUP), Conversations on Consciousness  (OUP Oxford) in November 2005, and Zen and the Art of Consciousness was published in March 2011.

Simply put I am an atheist. That is, I don’t believe in any kind of god. I think that the major religions of the world are dangerous selfish memeplexes that use a variety of tricks to propagate themselves and do great harm to both individuals and society – from preventing truthful education to justifying war and murder. However, most religions include at least two aspects which I would be sorry to lose.

First is the truths that many contain in their mystical or spiritual traditions; including insights into the nature of self, time and impermanence. Happily, these can be found through meditation, drugs, ritual and other methods and are not the sole prerogative of religions. I have had many spontaneous mystical experiences, and have practiced Zen meditation for more than 20 years.

The other is the rituals that we humans seem to need, marking such events as birth, death, and celebrations. Humanism provides a non-religious alternative and I have found the few such ceremonies I have attended to be a refreshing change from the Christian ones of my upbringing. I am also glad that these ceremonies allow for an eclectic mixture of songs, music and words. In spite of my lack of belief I still enjoy the ancient hymns of my childhood and I know others do too. We can and should build on our traditions rather than throwing out everything along with our childish beliefs.

On February 13th 2006, Susan Blackmore gave the 4th Humanists UK Darwin Day lecture, on “Darwin’s meme: or the origin of culture by means of natural selection” and in October 2009 spoke at the Humanist Philosophers’ day conference “Evolutionary Theory: Is this all there is?”. She  appeared on a March 2006 ‘Analysis’ programme on Radio 4, and felt her views on Humanism were misrepresented.  Click here to see her blog on Humanism, and watch her talking about Humanism in The really simple guide to Humanism.

You are here: About us > Our people > Patrons > Dr Susan Blackmore