Revealed: How many marriages each religious group and Humanists UK do

Weddings conducted by Humanists UK celebrants grew by 240% between 2004 and 2015, it has been revealed, meaning that Humanists UK is now the fifth biggest organisation providing religious or belief-based wedding ceremonies and the largest non-civil/non-Christian provider.

For the first time, official statistics have revealed how many marriages are performed by each different religious denomination in England and Wales – allowing a comparison between them and with how many couples are choosing a humanist wedding.

The new figures show how many marriages different groups performed from 2004-15 and were obtained by Humanists UK following a request to the Office of National Statistics. In the past the number of Church of England, Catholic, other Christian, and other religious marriages have been published, but no further breakdown.

Alongside the official figures, Humanists UK is publishing for the first time the number of wedding ceremonies its celebrants have reported over the same time period, and can reveal that it topped 1,000 in 2016. Projecting the decline in the number of religious marriages forward to 2016, Humanists UK believes it is now probably the fifth biggest organisation providing religious or belief-based wedding ceremonies in England and Wales, after the Church of England, Catholic Church, Church in Wales, and Methodist Church. There are also more civil marriages than religious.

What is more striking is when looking at the relative growth and decline over the 11-year period. Here, the growth of Humanists UK weddings really stands out: 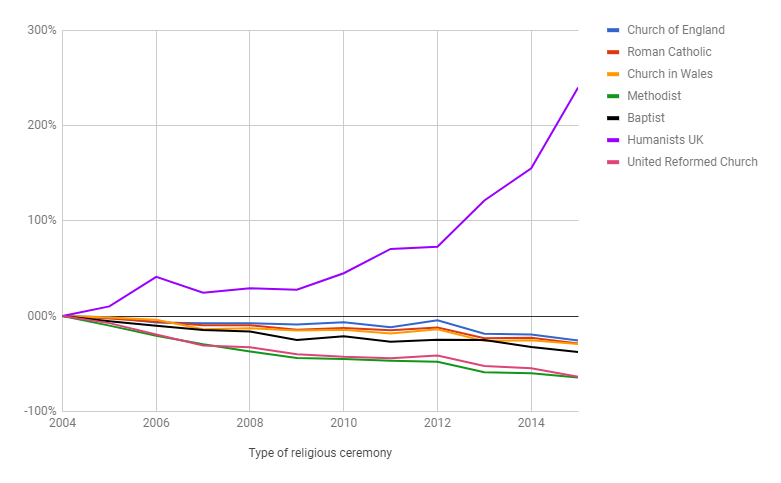 At present, while religious ceremonies are legally recognised as marriages in England and Wales, humanist weddings are not. Couples wishing to have a humanist wedding ceremony must also have a civil marriage if they want legal recognition. Some choose not to do so, but those who do face additional costs and inconvenience, as well as being unable to have legal recognition for the wedding ceremony that is most meaningful for them.

Humanist weddings are recognised as legal marriages in Scotland (where they comprise 17% of the total), the Republic of Ireland (where they comprise 7%), and – as of February – in Jersey. The Belfast High Court ruled last year they must also gain recognition in Northern Ireland, but that decision was appealed by the Government; a decision of the Court of Appeal is awaited.

Humanists UK Chief Executive Andrew Copson commented, ‘What this research reveals for the first time, is the explosion in demand for legal humanist marriages in England and Wales. Well over 1,000 couples are now having non-legal Humanists UK wedding ceremonies, more than the vast majority of religious groups. That humanist ceremonies are not recognised when religious groups are is unjustified and unfair. The Government has the power to correct this, simply and without an Act of parliament. They should do so, and bring this inequality to an end.’

Recognition of humanist marriages around the UK, Ireland, and crown dependencies

Guernsey is also currently considering legal recognition of humanist marriages, as part of a similar wider review of marriage law.

In Northern Ireland, Humanists UK and its section Northern Ireland Humanists have been working through the courts to secure recognition of humanist marriages alongside public speaker Laura Lacole and footballer Eunan O’Kane. A High Court decision granted initial legal recognition to humanist marriages but this has been stayed as it was subsequently appealed by the Government. The Court of Appeal finished hearing the appeal in early January. Its decision is expected soon.

In England and Wales, since 2013 the UK Government has had the power to extend legal recognition if it wishes, but hasn’t chosen to use this power yet. Jersey’s move must surely increase the pressure for it to do so.

At Humanists UK, we advance free thinking and promote humanism to create a tolerant society where rational thinking and kindness prevail. Our work brings non-religious people together to develop their own views, helping people be happier and more fulfilled in the one life we have. Through our ceremonies, education services, and community and campaigning work, we strive to create a fair and equal society for all.

You are here: Revealed: How many marriages each religious group and Humanists UK do