Humanists everywhere reacted with shock and disgust yesterday as one of Bangaldesh’s most prominent secular bloggers, Avijit Roy, was killed on the streets of Dhaka with cleavers and machetes. Avijit’s wife, Rafida Bonya Ahmed, was also severely injured in the attack, and is now in a critical condition.

Hailed by his fellow blogger Asif Mohiuddin and others as ‘the Richard Dawkins of Bangladesh’, Avijit was a warm-hearted, peace-loving writer who believed in the power of good ideas to inform and educate, and to change circumstances for the better.

He founded the freethought blogging platform Mukto-Mona (meaning ‘Free Mind’) to be, in his words, ‘an Internet congregation of freethinkers, rationalists, skeptics, atheists, and humanists of mainly Bengali and South Asian descent.’

The British Humanist Association (BHA), which awarded Avijit and his circle of bloggers with the Free Expression Award at the 2014 World Humanist Congress, has reacted with shock and sadness at the news of his death. The Free Expression Award recognised the bravery of these bloggers in spite of serious threats to their wellbeing from Islamic fundamentalists. Prior to Avijit’s murder, others in his circle had previously been attacked and killed. As recently as 2013, Asif Mohdiuddin was stabbed and left for dead for publicly condemning Al-Qaeda and criticising Sharia law online, while blogger Ahmed Rajib Haider was killed in identical circumstances to Avijit in Dhaka.

Avijit had returned to Bangladesh from America last week to celebrate the publication of a Bengali-language science book. He had received a number of credible death threats from a man named Farabi Shafiur Rahman, an extremist linked to Hizb ut-Tahrir and Jamaat-e-Islami. Though Farabi made his threats to Avijit and others out in the open, no action was taken against him by Bangladeshi authorities.

Of Avijit, Farabi said ‘Abhijit Roy (Avijit Roy) lives in America and so, it is not possible to kill him right now. He will be murdered when he comes back.’

‘My heart sank as I heard the news yesterday that Avijit had been killed. In Avijit, Humanism had a powerful advocate, and through Mukto-Mona he supported a generation of freethinkers and humanists to come together and articulate a vision for a better society. They prized the ideal of a better Bangladesh and a better world: a fairer, more harmonious place, free from the threat of violence on the streets of the sort which killed Ahmed Haider in 2013 and Avijit himself just yesterday.

‘With Avijit’s death, Bangladesh has lost not just a son, but a forceful proponent of human rights and equality for all its people. Bangladesh must do more to protect its freethinkers, and indeed all its citizens, from brutal fundamentalist thugs who would kill another human being for daring to think outside the confines of dogmatic religion.’

‘Our thoughts are with Avijit’s family and loved ones around the world. They are joined in their mourning by thousands of Avijit’s fellow humanists. We owe it to Avijit and to his family to see that justice is done.’

The BHA has decided today to publish graphic imagery from the scene of the attack. It does this not to sensationalise the killings, but to fix the world’s gaze on a problem about which pressing action needs to be taken. 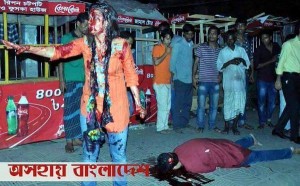 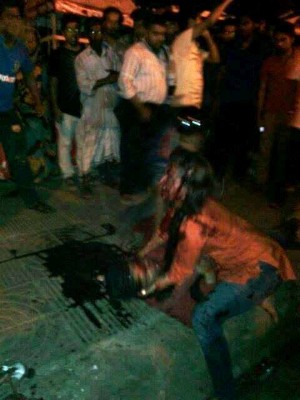 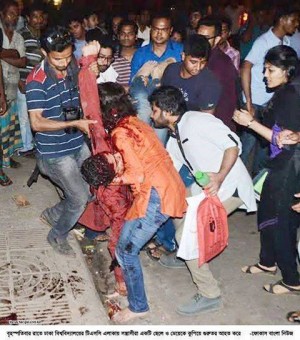 ‘The plight of non-religious people all over the world is routinely ignored by the media, but the blood of non-religious people continues to pour. No one should die for an idea, or for what they choose to believe or disbelieve. The world cannot pretend that this is not happening… not while blasphemy continues to be a punishable crime in at least 55 countries, or while over a dozen countries continue to mete out death sentences to people simply for being atheists.

‘These photos are not pleasant, and many will choose not to look at them. But we believe that the world must not shy away from its problems, and from the threat posed by religious extremists to peaceful people all over the world. Through its inaction, Bangladesh in effect condones the merciless hounding of atheists by Islamic fundamentalists. We must all, in the spirit of Avijit and his fellow bloggers, have the bravery to challenge bad ideas and evil acts.’

The British Humanist Association is the national charity working on behalf of non-religious people who seek to live ethical and fulfilling lives on the basis of reason and humanity. It promotes a secular state and equal treatment in law and policy of everyone, regardless of religion or belief.

You are here: Humanist blogger Avijit Roy hacked to death by Islamic fundamentalists in Dhaka