Will and Katie’s humanist wedding

We love a good wedding story, so we were delighted when Katie offered to tell us all about her weddings to Will – both of them!

We met teaching sailing on the Isle of Scilly and by the second season, we were a couple. We had a long distance relationship for a couple of years until I finished uni. We had been together for four years before the proposal and then we were engaged for a year and a half.

Will proposed on Christmas day. He took me for a walk down to the river (with my dog) near my family home. He got down on one knee while letting me open the advent calendar he had made which had a note saying, ‘Will you marry me?’ behind the 25th door. As I opened it, he got out the ring that he had designed and made (with the help of a jeweller). In the advent calendar, there was the certificate of authenticity of the Scottish sapphire he had sourced for the ring. A word on the certificate revealed that each day of the advent calendar had provided clues.

Straight away, we started talking about options and what each of us would like or dislike. The most important part for us was it to be unique to us, memorable, and on a beach!

Wedding on the beach

Why we chose a humanist wedding

Neither of us is religious, so we didn’t want to get married in a church and we felt just going to the registrar wasn’t romantic or special enough. Then a friend told us about humanist wedding ceremonies and how we might find they fitted us well. So we looked it up (never having heard of humanists or humanism before) and found that it did fit… perfectly! Not only did we agree with the values, but we could have the wedding anywhere – a must for us!

We searched for ‘celebrants based in Cornwall’ and came up with several different results. So we emailed each of them and set up meetings. In the end, we chose the celebrant from the Humanist Ceremonies network, Kim because a humanist wedding offered the most flexible format and was more tailored to our values and who we were as a couple.

We had an initial Skype meeting to begin with as we were living in Scotland but having the wedding in Cornwall (where Will is from). This was great for us as it meant we didn’t have to travel all the way south for a meeting! In the meeting, we chatted a bit about humanism, our plan and vision for the wedding, and just generally got to know each other a bit.

Having had Skype meetings with other celebrants as well, we just ‘got a feeling’ when we talked to Kim. Conversation was easy, we loved Kim’s energy/enthusiasm, and that she was up for our crazy plan. And we knew our big day would be in safe hands with her.

We had told her a bit about ourselves, hobbies, interests, values, etc and she came up with some suggestions that she thought suited us well. We were able to email at anytime for help and more suggestions and we also used Pinterest and Google.

At first, we didn’t have a vision; we just knew we wanted it to be ‘us’ – something completely unique to us  – and we went from there! Soon we came up with our plan and after that had a clear vision. Kim was great in helping us develop our thinking about what we wanted to create something that really reflected us in a personal way.

We actually had two humanist ceremonies! We had one on a ‘sandbar’ – a partly exposed ridge of sand built by waves from a beach on the Isles of Scilly. We consider this to be our main wedding, but being on a sandbar with tight timescales and limited space meant that we only had parents and siblings at the first ceremony.

Celebrant Kim Baker with Will and Katie

After that, we went to the register office to ‘sign the paperwork’ and make it official. This meant we were legally married, but we still wanted another humanist ceremony that all our friends and family could attend.

Then we had another ceremony back on the mainland with all the people we love the most. It was a continuation and celebration of the first ceremony .

Both humanist ceremonies felt amazing! They were so completely us – absolutely everything about them – and we really enjoyed them.

Each ceremony was personalised to us in every way shape and form: there was a basic script that Kim created and from there we chose any readings, songs, and poems we wanted. We could also choose any symbolic acts and personalise it in any way.

In the first ceremony, we chose to exchange rings. To us, the rings symbolise the act of getting married and our unity. They were special to us as we had designed and made them together.

In the second ceremony, we wanted something different to show us joining together and to symbolise an unbreakable bond. So for this we chose to ‘tie the knot’ using a fisherman’s knot, which once tied only becomes stronger under pressure and does not break. We are also both big into sailing and so using sailing ropes to do this added a bit of personalisation to our ceremony.

We also chose to include a sand-blending at the end of ceremony – but with a difference. We asked each of our guests to bring some sand from their favourite beach location. At the first ceremony, we had both collected some sand. Then we poured our sand, followed by that of our guests. We chose to do this as it was a good way to get our guests involved with the ceremony, it fitted well with our beach and sailing themed wedding and showed the unity of all our friends and family in supporting our marriage. It also provided a neat memento!

For the first day, ‘Wedding Part One’ as we like to call it, we had a Best Man, Richard who is Will’s best friend and who was there when we first got together.

My best friend Camilla was our Maid of Honour. We have known each other since we were a couple of months old! We’d always said growing up that we would be each other’s Maids of Honour, so it was an easy choice!

Then we had our sisters and brothers as bridesmaids and ushers and our niece as our Flower Girl. It was thoroughly a family affair!

On the second day, we still had the bridesmaids and ushers but they didn’t walk down the aisle – they were there to help with guest seating. We did, however, keep the Flower Girl who walked down the aisle in front of us as we entered together, with Will’s dog as well.

The Isles of Scilly is a place that’s very special to us. It’s where we met and got together and is a location we love, so we just had to get married there. We chose the sandbar as our ultimate venue as we loved being at sea and on the beach, it was a gorgeous location and a bit adventurous!

For the second day we had the celebration at Will’s parents farm as it was another gorgeous location –  and meant we could save some money!

Being able to have the ceremonies where we wanted meant everything and it was really important to us to have the freedom to go wherever we liked, which we could do with a humanist ceremony.

We did the legal bit just after the first ceremony on Day One. To us we just thought of it as ‘signing the documents’ to make it all legal. We consider our ceremony earlier in the day as actually getting married. It felt so personal and significant to us.

In terms of celebrating our wedding anniversary, we purposely made both happen on the same day, but if we hadn’t we would definitely celebrate on the anniversary of our humanist ceremony as it is what we consider to be our marriage.

Our photographer had previously done Will’s brother’s wedding, so we knew his work well. We also loved the pictures he had taken, how he had captured the natural moments, and how his photos really told a story of the day. We also really liked the aesthetics of the photos and how he was up for an adventure too!

Advice for other couples

To other couples who might be thinking of having a humanist wedding, we’d say, ‘Go for it!’ We totally loved ours and have no regrets, just plenty of happy memories.

Thank you to Katie and Will for sharing their story with us! If you would like your humanist wedding to be featured on our blog, please email us.

If you’re thinking of having a humanist wedding and would like to talk to a local celebrant, you can find one near you via our ‘Find a celebrant’ map. You can also find out more about humanist weddings on our FAQ page. 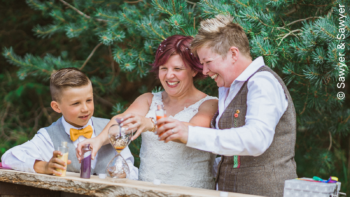 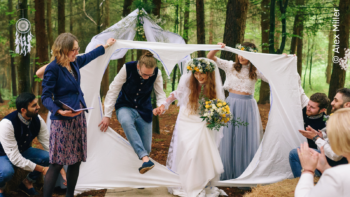 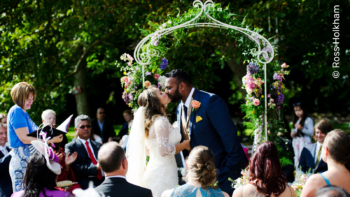