Fifteen-year-old Emily made the decision to change her name to Billie. When she learnt about Humanism as part of looking at different worldviews, she became interested in the idea of having a humanist naming ceremony. She believed that a ceremony would help those closest to her accept and understand her name change.

Celebrant Jane Richardson explains the ins and outs of planning a naming ceremony for – and with – a teenager.

Whatever your reason for changing your name, the UK Deed Poll Office will make the process easy for you.

At Humanists UK, we recognise that changing your name is a key milestone – and one you may wish to mark with a ceremony, surrounded by your friends and family. Our naming ceremonies are not only for children: humanist celebrants also conduct ceremonies for adults changing their name.

Fifteen-year-old Emily made the decision to change her name to Billie partly because she wanted to be seen as a person first and a girl second. Roz, Billie’s mum said:

‘Billie strongly felt that changing her name needed to be honoured with a special occasion. The initial decision to change her name seemed to be the easy bit for her – but getting people to respect, trust and accept the change proved to be a challenge at times.

‘I believe Billie wanted a ceremony to mark the name change as a way of demonstrating her sincere intention, an important decision, to include and share with family. In planning the service, it almost evolved into a coming of age celebration too.

‘I fully supported Billie’s wishes, knowing how much it meant to her and agreeing it should be marked with a special ceremony.’

Planning a naming ceremony for a teenager

Because of the pandemic and the restrictions on meeting with people from different households, our planning meeting took place via Zoom. Billie had very definite ideas about how she wanted the ceremony to look and feel – visually and in terms of content. This was great as it gave us a basis to work from.

The planning meeting was longer than previous meetings I’ve had to plan naming ceremonies for babies and young children. (They usually last around an hour and are followed by some email discussion around the draft ceremony.)

The focus of the writing was different to a ceremony for a baby. For this ceremony, much of the script was addressed directly to Billie – and some to her family. We worked together to make sure that the language and tone was appropriate.

The ceremony took place a few months after Billie’s 16th birthday, so it was a Coming-of-Age ceremony as well as a Naming. We looked back at all the things Billie had achieved in her life and looked forward to new beginnings such as starting college.

Billie’s mum had secretly asked everyone who knows Billie to describe her in three words, say what they thought her achievements had been so far, and what they thought she would be doing in five years’ time.  This was a great idea and I incorporated their answers into the ceremony.

Guests were also encouraged to write inspirational messages to Billie.

During the ceremony, I gave an explanation of why Billie had chosen her new name and a little about what it meant, and how it linked to the wider family. (I did this in the same way I would for a baby naming ceremony.)

Billie had made laminated hieroglyphics cards for each guest, so that they could make their own names. The activity provided an opportunity to fill glasses for the final toast, which was, of course, to Billie.

Asked how they felt during the ceremony, Roz said, ‘Proud. Very proud, honoured to be there, emotional, happy and grateful to Jane, who pitched every little detail perfectly.’

Billie said she felt, ‘Excited, special, listened to. It was about the ‘real’ me. I was really pleased it went well. It was perfect.’

Roz said, ‘I felt so happy for Billie, hopeful for her future, and comforted by guide parents’ presence. Billie now feels that more people know she has really changed her name. She also feels closer to family, and she would like to ask another person to be a guide parent now that she understands the role more.’

Thank you to Billie, Roz, and Jane for sharing this lovely story with us.

Jane says, ‘I enjoy creating unique naming ceremonies tailored to what your family would like. I enjoy listening to people talk about themselves and their family. I use this information to write your ceremony. I will help you find poems or readings that are meaningful to you.  When I conduct your ceremony I hope to be warm, inclusive, and to create an atmosphere that matches the importance of the ceremony.’

The role of the naming celebrant is to help you manage this process, let your creativity flow, and co-create the perfect day..

The first step is to find your naming celebrant. Your local celebrant will be happy to discuss your unique celebration. 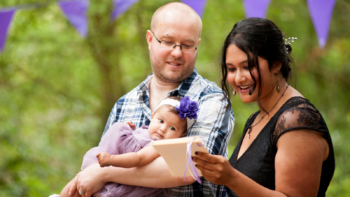 A humanist naming ceremony is the perfect way to welcome a new member of your family. 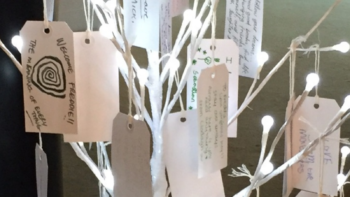 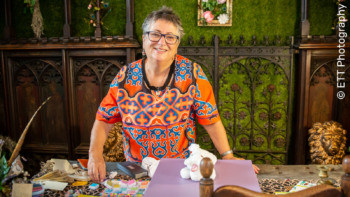 Your humanist celebrant will write a unique script to celebrate the naming of your child.