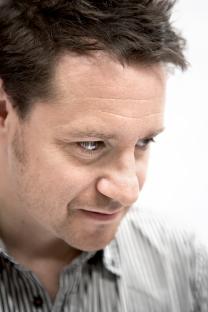 Jon Holmes is a seven-times Sony Radio and British Comedy Award winning writer and twice Bafta-nominated comedian. He wrote and appeared in BBC2’s “2009 Unwrapped”, presents his own show on BBC 6 Music, and haunts BBC Radio 4 like a tiny ghost, starring in “The Now Show”, co-creating “Dead Ringers” and starring in his own series “Listen Against”.

He co-writes “Armando Iannucci’s Charm Offensive”, wrote the BAFTAS with and for Stephen Fry, and turned his first book “Rock Star Babylon” into a stand-up show for the Edinburgh Festival. Jon also writes for the Sunday Times and his two new books The Now Show Book of World Records and The Complete History of the World Through Twitter were published in late 2009. His new book, The Now Show Paperback Book is due to be published in November 2010.

His television work includes “Armando Iannucci’s Time Trumpet”,” Top Gear”,” Mock the Week”, “Have I Got News For You” and “Harry Hill”,  and he also co-adapted (from the books) and writes “Horrible Histories” for Children’s BBC. He was once asked to go into the jungle on “I’m a Celebrity Get Me Out of Here”.

You are here: About us > Our people > Patrons > Jon Holmes