Labour MP for Nottingham North from 1987 to 2017, and Patron of Humanists UK 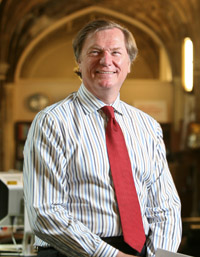 Born in January 1953 , Graham Allen has a degree in politics with economics and sociology. He held shadow ministerial posts from 1991 to 1997 in Social Security, Constitutional Affairs, Media and Broadcasting, Transport and Environment. He was a Government whip from 1997 to 2001 and in February 2006 was Chair of the All-party Camping and Traveller Management Group and Vice-President of the All-party Cricket Club Group. He is also Chair of Nottingham’s regeneration board.
His particular interests are in economic policy and democratic renewal, and he is especially interested in the USA, Russia and China. He has been described as “One of the most original constitutional thinkers in the Commons.” (Andrew Marr)

He has been an active supporter of Humanists UK’s campaign against faith schools, asking questions in Parliament, signing a letter published in The Independent in July 2001 which urged the Government to reconsider its support for the expansion of maintained religious schools, and, in February 2006, initiating a debate on faith schools.

He told The Guardian that his proudest achievement in Parliament since 2001 is: “Sadly, having to organise the two largest revolts within a governing party in British political history on Bush’s timetable for war in Iraq. Locally, becoming a constituency entrepreneur, especially on crime and education in a deprived constituency.”

He is the author of Reinventing Democracy (1995) and The Last Prime Minister (2001). The latter was revised in 2003 as The Last Prime Minister – Being honest about the UK presidency, and focuses on Parliament’s constitutional impotence during the Iraq crisis. Buy his books at Amazon.co.uk through this link and a portion of the sale price will go to Humanists UK.

A brief Wikipedia biography.
More on his parliamentary career at www.grahamallenmp.wordpress.com or TheyWorkForYou.com.

You are here: About us > Our people > Patrons > Graham Allen