Back to: About us

In 2021, Humanists UK is celebrating its 125th anniversary with a renewed focus on its history. The new website Humanist Heritage is a rich web resource that uncovers the untold story of humanism in the UK – a story of people, groups, objects, places, movements, publications, and ideas.

Humanists UK was founded as the Union of Ethical Societies in 1896 and became the British Humanist Association in 1967. Throughout its existence, its guiding conviction has been that “this is our world, our responsibility, our possibility”, in the words of an early Humanists UK member, Dr Peter Draper.

The Ethical Societies soon joined into an Ethical Union, giving strength to the movement. There were, for instance, twenty-six Societies in 1905-6, and seventy by 1915. Apart from the reflection on high ideals of “the good and the beautiful”, the Union also campaigned. It joined a coalition for the Repeal of the Blasphemy Laws in 1912 and also worked for secular education, with an additional emphasis on the development of Moral Education. Ethical members joined the Peace Society set up by freethinkers in the period before the Great War, which called for no conscription and opposition to military training in schools. More women were involved in the Ethical Union than in the Secular movement and there was support for the suffragettes.

An ethical leader at the South Place Ethical Society (SPES) was Stanton Coit, described by a fellow American as “The most secular man of the year, but also the most spiritual.” He was very keen on the idea of an Ethical Church and even held the fanciful idea that the Church of England could be turned into an ethical church.

The West London Ethical Church held Sunday services with up to 400 members and ethical hymns, readings and highly regarded music. He fell out with the South Place Ethical Society, but remained a leader within the Union until beyond 1930s. He was joined by Harold J. Blackham as a “minister” at the West London Ethical Church. Harold Blackham shifted the movement away from worship and the final vestiges of the movement’s “religious” past.

In the 1950s, with ethical worship having lost its popularity, there was a move towards merger with the Rationalist Press Association and South Place Ethical Society. In this, Harold Blackham played a leading role. The Humanist Council was set up and a meeting in 1957 led to the launch of the Humanist Association to investigate amalgamation. Members agreed on action to support unilateral disarmament for nuclear tests, opposition to racial discrimination and support for work for underdeveloped countries.

Unfortunately, there were technical obstacles to merger, including difficulties surrounding charitable status, and the Humanist Association was replaced in 1959 by a co-ordinating Humanist Council. In 1963 the RPA and Ethical Union decide to sponsor an ‘umbrella’ British Humanist Association and its inaugural meeting took place in 1963 in the House of Commons with Sir Julian Huxley, A. J. Ayer, and Baroness Wootton among those present.

The sixties was a period of reform – into which Humanists UK’s campaigns fitted well. Early efforts involved the repeal of Sunday Observance Laws and the reform of the 1944 Education Act’s clauses on religion in schools. More generally Humanists UK aimed to defend freedom of speech, support the elimination of world poverty and remove the privileges given to religious groups. Ambitiously, it was claimed in 1977 that Humanists UK aimed “to make humanism available and meaningful to the millions who have no alternative belief.”  Harold Blackham, a leading light in these early days, was a philosopher, organiser and diplomat and wrote important books on Humanism.

Educational issues have always been important to Humanists UK . Efforts to abolish daily worship in schools and to reform Religious Education so that it is objective, fair and balanced and included learning about Humanism as an alternative life stance. Gaining recognition for Humanism as a lifestance has been a constant theme. 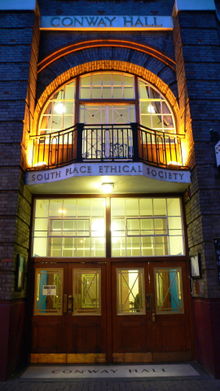 Social concerns have persisted in Humanists UK’s programme. Humanists UK was a co-founder of the Social Morality Council (now transmuted into the Norham Foundation), which brought together believers and unbelievers concerned with moral education and with finding agreed solutions to moral problems in society. It produced a number of well-regarded reports, all now out of print but readily available secondhand as a Google search will find.

At a time when sheltered housing, adoption and counselling services were dominated by religious organisations the Humanist Housing Association provided accommodation for elderly humanists, the Agnostics Adoption Society opened adoption to the non-religious, and the Humanist Counselling Group was a key pioneer in non-directive counselling. When such services became generally available the first two bodies were merged with other providers and the third was wound up.

Humanists UK has been active in arguing for voluntary euthanasia and the right to obtain an abortion. It has always sought an ‘open society’ in which people of fundamentally different views co-operate in shared and neutral institutions for the common good.